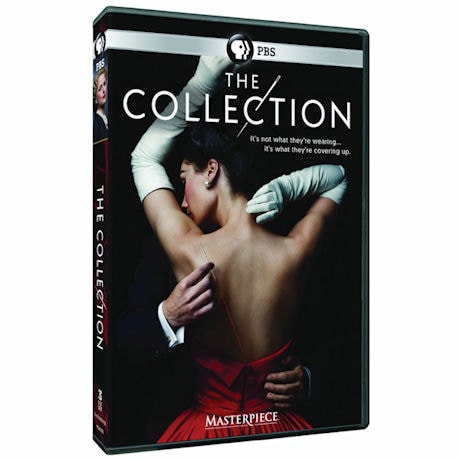 Starting at $49.99
Share Me:
add to wish list
Overview
Possibly the most glamorous series on TV - Telegraph (London) In post-WWII Paris, the charming and ruthless Paul Sabine (Richard Coyle, The Fall) struggles to build a fashion empire at any cost. His dresses are a sensation, but behind the glamour and elegance lies a devastating secret. Seen on Masterpiece, inspired by iconic French designers, this high-fashion thriller also stars Mamie Gummer (The Good Wife), Tom Riley (Da Vinci's Demons), and Michael Kitchen (Foyle's War) as Paul's mentor. 8 episodes, 8 hrs, 3 DVDs or Blu-ray discs, SDH. Mature audiences.
Episodes
Episode 1 - The Deal
1947, Paris. Paul Sabine is offered the keys to Paris' fashion kingdom, which could transform his business. But his volatile brother, Claude, is the true genius behind the label. The secret must be kept at any price…even murder.

Episode 2 - The Dress
The new business marriage with Jules Trouvier is only hours old, when he and Paul clash over how to run the house. With millions at stake, Nina is thrust into the unlikely role of a couture model, and events take a darker turn.

Episode 3 - The Scent
Rossi returns to question Paul's former boss, who may choose to expose Paul's wartime secrets rather than his own. And under pressure to create the Spring Collection, the maison is a hive of activity, yet Claude is still not working.

Episode 4 - The Launch
A detective arrives asking questions about the dead body, increasing the pressure on Paul. With everything is riding on the new show only days away, the family secrets continue to drive wedges into the Sabine family.

Episode 5 - The Afterglow
Instead of celebrating a jubilant show, Paul is questioned by a detective and has to exercise damage control. The escalating tensions leave Paul trapped between his past and his future, and Claude wants his rightful place at the table.

Episode 6 - The Weekend
The return of American reporter Rossi leaves Paul feeling uneasy. The Sabine "family" is rocked by untimely revelations, and surprising alliances. Could a spurned staffer threaten Paul's livelihood more than a mud-slinging reporter?

Episode 7 - The Betrayal
The mood is somber following a staffer's road accident, and a counter-attack on the business threatens to expose Claude as the true genius behind the Paul Sabine label. The pressure almost becomes unbearable when Inspector Bompard returns.