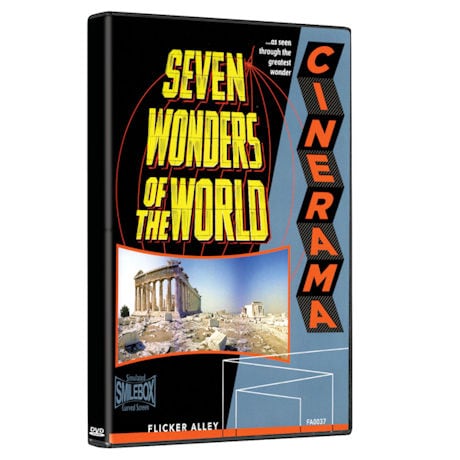 Overview
Released in 1956, not seen in theaters since the early 1970s, this Cinerama classic follows adventurer Lowell Thomas as he seeks out the Seven Wonders of the Modern World. Circling the globe in the "Smasher," a converted B-25, Thomas takes us to the Great Pyramids, a live East African volcano, the Parthenon, Angel Falls in Africa, and many more stops along the way. Restored and remastered, with extras. 2 hrs on 2 discs. Blu-ray/DVD Combo.


DVD Extras
• This deluxe Blu-ray/DVD combo set comes complete with the original Seven Wonders of the World breakdown reel - the same one used in its 1956 theatrical run.
• Image gallery.
• Newsreel from the opening night in New York.
• A restoration demonstration on how the damaged negative was fixed.
• The Best in the Biz Cinerama composers documentary, the French Cinerama Everywhere short on Cinerama tent shows in Europe.
• A brand new Seven Wonders of the World movie trailer, a black & white TV trailer, and a 1960 abandoned trailer.