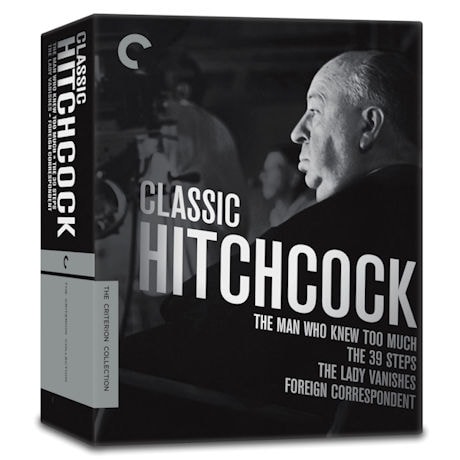 Overview
From Criterion: four of the greatest films by the Master of Suspense, digitally restored and accompanied by many extras. Includes The Man Who Knew Too Much (1934), The 39 Steps (1935), The Lady Vanishes (1938), and Foreign Correspondent (1940). Plus audio commentaries, video essays, radio adaptations, documentaries, new and archival interviews, behind-the-scenes photos, and more. 4 films, 6 ¼ hrs, 4 Blu-ray discs, B&W and color.
Episodes
The Man Who Knew Too Much
Alfred Hitchcock 1934
This fleet and gripping film is the first of the early thrillers the Master of Suspense, Alfred Hitchcock, made during the fertile phase of his career spent at the Gaumont-British Picture Corporation.

The 39 Steps
Alfred Hitchcock 1935
A heart-racing spy story by Alfred Hitchcock, The 39 Steps follows Richard Hannay (Robert Donat) as he stumbles upon a conspiracy that thrusts him into a hectic chase across the Scottish moors.