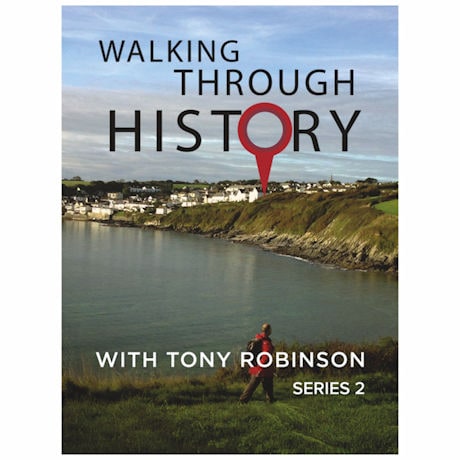 Overview
Sir Tony Robinson heads out on six walks across Britain to find the history embedded in the landscape; each walk leads him to a different time and a stunning location to find a unique story from the past. 6 episodes, 4 ½ hours, 2 DVDs.
Episodes
Episode 1: Stonehenge
Tony Robinson embarks on a 45-mile walk across Wiltshire, from Avebury to Stonehenge, telling the story of the remarkable development that occurred in the latter days of the Neolithic era. His route takes him through one of the greatest concentrations of prehistoric sites in Europe.
Episode 2: The Lakes
The Lake District was not always considered a place of stirring beauty. Long before Wordsworth and Beatrix Potter helped popularize the area, it was a forbidding, mountainous enclave that invading Roman legions struggled to conquer. Tony Robinson tackles the journey walking 50 miles from Penrith to Ambleside and on to the Irish Sea at Ravenglass, discovering that the Romans encountered beauty and danger in equal measure.
Episode 3: Cornwall
Tony Robinson takes a four-day trek along the coastline between Plymouth in Devon and Falmouth, learning about the thriving smuggling trade in Cornwall during the late 18th century. The area's tiny secretive harbours, beaches and secluded coves were ideal for illicit imports such as tobacco and brandy, and the business was so huge it threatened the national economy. Along his route, visiting such beauty spots as Lantic Bay and Polperro, he encounters all sorts of reminders of the trade and meets descendants of those involved.
Episode 4: Wigan Pier
Tony Robinson begins with a towpath exploration of industrial engineering along the Leeds and Liverpool Canal. Setting off from Liverpool, he takes a three-day walk inland to Wigan, ending at the town's iconic pier as he traces the story of the waterway's chaotic construction and its impact on the development of Lancashire.
Episode 5: Northumbria
For those of us who haven't been there, it can be hard to grasp the scale of big Scottish sporting estates. Tony Robinson explores the history of the ancient kingdom on a walk from Melrose in the Scottish Borders to Holy Island off the coast of Northumberland. He goes on the trail of one of Northumbria's greatest sons - Saint Cuthbert. Through the Tweed Valley and across the Cheviot Hills, it's a journey through a murky history laden with myth.
Episode 6: North Norfolk
Tony Robinson travels along the north Norfolk coast through one of the least developed spots in Britain, finding out how the area maintained its rural, remote identity despite the dynamic industrial changes of the Victorian age.