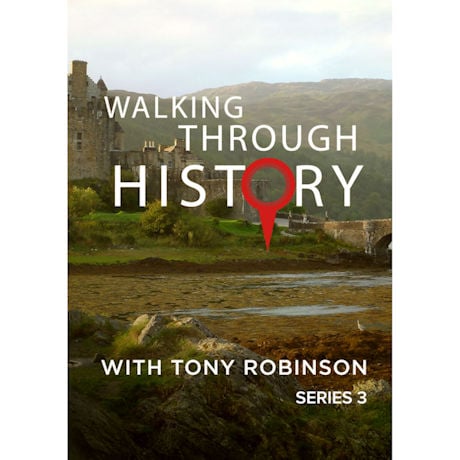 Overview
Wander iconic British landscapes with actor, author, and historian Sir Tony Robinson. As he explores West Yorkshire, a park in the Scottish Highlands, the Channel Islands, Sherwood Forest and other picturesque locations, he shares colorful stories about the Brontës, Queen Victoria and Prince Albert, the Norman Conquest and more. A treat for armchair travelers and history buffs, made for British television. About 3 hrs, 2 DVDs.
Episodes
Episode 1: Bronte Country
Tony's walk tells the life story of the remarkable Bronte family and explores how the moors inspired their most famous novels.
Episode 2: Victoria & Albert's Highland Fling
Tony walks across the Cairngorms to Balmoral, in the footsteps of Victoria and Albert who discovered and promoted the Scottish Highlands, enthusiastically adopting the kilt, the Highland Games, hunting and fishing.
Episode 3: The Norman Conquest of Pembrokeshire
Tony traces the Norman conquest of this corner of Wales which still feels more English than the rest of the country, nearly 1000 years later.
Episode 4: Nazi Occupation: The Channel Islands
For five years, the Channel Islands were occupied by the Germans, the only part of the British Isles to be so. Tony tells of the story of the Occupation; its physical impact is still very visible and the experience still remembered.
Episode 5: King John's Ruin: The Peak District
Nowhere is fact and fiction so entwined than in the stories of King John, Robin Hood and the Sheriff of Nottingham. Yet out of this legendary time came Magna Carta, a foundation stone of modern democracy. On the 800th anniversary of the signing, Tony unravels the history from the myth.
Episode 6: England's Last Battle - West Country
In 1685, a rebel army landed at the pretty Dorset port of Lyme Regis and swept up through Somerset, pausing at Taunton to declare its leader, Duke of Monmouth, the rightful king. Tony walks in their footsteps and relives their spirit.