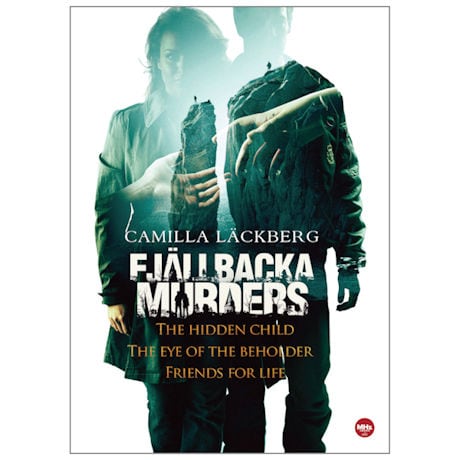 Overview
Based on the international best-selling novels, renowned Swedish crime writer Camilla Lackberg who is often referred to as the "Swedish Agatha Christie" is published in more than 50 countries. Erica Falck, a successful crime writer and mother of three has just moved back to her hometown of Fjällbacka, a fishing village on a picturesque island off the coast of Sweden. Simmering beneath the village's surface lie hidden secrets, twisted desires and deceit waiting to erupt into the ultimate sin—murder. 6 episodes, 6 DVDs, 9 hrs. Swedish with English subtitles.
Episodes
The Hidden Child
A few months after Erica's parents are killed in a violent car crash, a man arrives on her doorstep claiming to be her brother. Unconvinced, she asks him to leave. But when he's found murdered a few days later, she begins looking through her mother's things and discovers a long hidden secret that someone is very determined to keep secret.

The Eyes of the Beholder
A well-to-do businessman is murdered and Erica's sister was the last person to see him alive. Things get even more complex when Anna confesses that she spent the night with him. As the questions multiply and grow, it's discovered that Anna's common-law husband knew of the affair.

Friends for Life
When looking for the subject of her next book, her agent suggests basing it on an event from Erica's own life. Looking back to her teenage years, she recalls the disappearance of her classmate, Peter. As she begins digging into the past, she sets off a chain of events that brings the mystery closer to home.

The Sea Gives, the Sea Takes
When Erica finds photographer Stigge murdered in his studio, she can't help but take interest in the investigation. She learns that her mother-in-law, Kristina, was one among many in the neighborhood whom Stigge had blackmailed. With this news, Erica begins to dig even deeper into his past.

The Coast Rider
The coast guard finds two amateur divers dead after a storm and then discovers that two more are missing. Erica investigates something that could link all of the victims together: the divers had salvaged a shipwreck from the 1820s, where they found intact bottles of wine worth millions at auction.

The Queen of Light
On a crystal clear, starry winter night a young woman dressed in a traditional Lucia gown is seen running across the ice. When she reaches an unfrozen channel, she drops her crown of candles in the snow and throws herself into the dark waters. As Erica investigates the case, she discovers the missing Lucia, a secret love affair and a man seeking revenge.