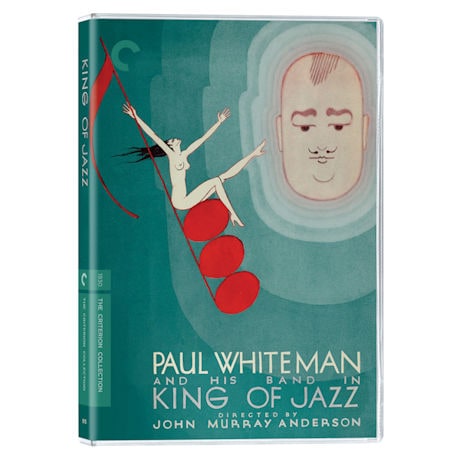 Overview
Made during the early years of the movie musical, this legendary 1930 film was one of the most extravagant and technically ambitious Hollywood productions of its day. Starring bandleader Paul Whiteman, then known as the King of Jazz, it features a spectacular array of sketches, performances, and orchestral numbers, all lavishly staged and beautifully shot in early Technicolor. Long available only in incomplete form, it was recently restored to its original glory. 90 min, 1 Blu-ray disc.
DVD Extras
• New 4K digital restoration by Universal Pictures, with uncompressed monaural soundtrack on the Blu-ray
• New audio commentary featuring jazz and film critic Gary Giddins, music and cultural critic Gene Seymour, and musician and bandleader Vince Giordano
• New introduction by Giddins
• New interview with musician and pianist Michael Feinstein
• Four new video essays by authors and archivists James Layton and David Pierce on the development and making of King of Jazz
• Deleted scenes and alternate opening-title sequence
• All Americans, a 1929 short film featuring a version of the "Melting Pot" number that was restaged for the finale of King of Jazz
• I Know Everybody and Everybody's Racket, a 1933 short film featuring Paul Whiteman and His Orchestra
• Two Oswald the Lucky Rabbit cartoons from 1930, featuring music and animation from King of Jazz

"No film shows off early Technicolor better…It's a revue of stunning lavishness and quite a bit of historical importance."—Farran Smith Nehme, Film Comment