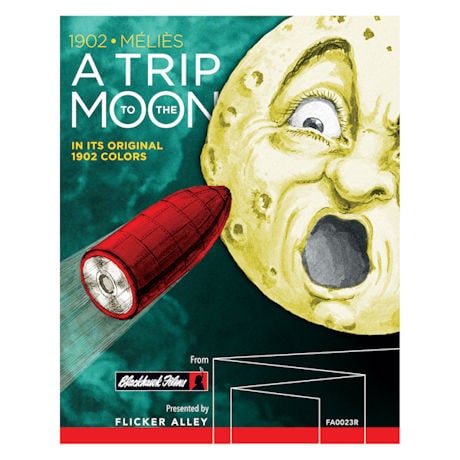 Overview
Follow the intrepid members of the Astronomers' Club on the first outerspace adventure in the history of cinema! Once believed lost, a copy of the original, hand-colored version of Georges Méli&eagraves' 1902 masterwork was miraculously found in Barcelona, Spain in 1993. The film underwent one of the most ambitious restorations ever. This deluxe blu-ray/DVD dual edition features new scores and many extras. 80 min on 2 discs. Silent with English Intertitles.


DVD Extras
The Extraordanary Voyage:
Directors Serge Bromberg and Eric Lange (Lobster Films) chronicle the journey of A Trip to the Moon from production in 1902, to the astonishing rediscovery in 1993, to the eventual restoration and opening at the Cannes Film Festival in 2011. The 65-minute documentary includes interviews with filmmakers Costa Gavras, Michel Gondry, Michel Hazanavicius, and Jean-Pierre Jeunet on Méliès enduring significance to cinema.

A Trip to the Moon (B/W):
A beautifully restored black-and-white edition from original 35mm elements with two separate audio tracks of music: An orchestral score by composer Robert Israel with the original English narration written by Georges Méliès and a second track produced by Russell Merritt consisting of a troupe of actors voicing the various characters as performed in the U.S. in 1903, with piano accompaniment by Frederick Hodges.

Souvenir Booklet:
23-page booklet featuring an essay by Gilles Duval and Séverine Wemaere, as well as rare production photographs, original drawings by Méliès, and much more!