This Is Cinerama Blu-ray 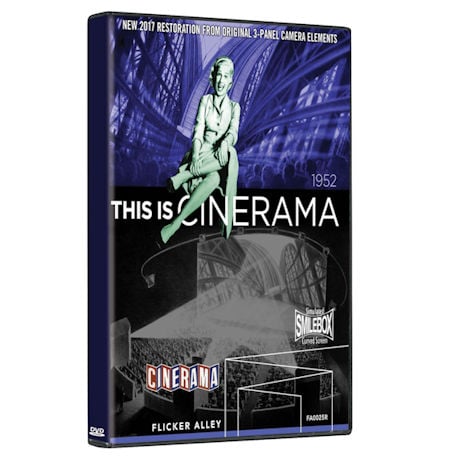 This Is Cinerama Blu-ray

Overview
In the early 1950s, TV became a major threat to movie theaters. Hollywood fought back with Cinerama, an immersive, widescreen spectacle that viewers couldn't experience at home. Filmed in Venice, Madrid, Edinburgh Castle, Milan's La Scala opera house, from a rollercoaster and the nose of a B-25 bomber, hosted by Lowell Thomas, this splashy 1952 classic was seen by more than 20 million people in its original roadshow version. Restored with "Smilebox" curved-screen simulation and many extras. 2 hrs on 1 Blu-ray disc. Color and B&W.


DVD Extras
• Audio Commentary - With John Sittig (Cinerama Inc.), David Strohmaier (Cinerama Restorer), Randy Gitsch (Cinerama Historian), and Jim Morrison (original crew member)
• The Best in the Biz - Updated hour-long documentary about the composers of Cinerama
• Restoring This is Cinerama - A detailed, behind-the-scenes look at the brand-new restoration
• Alternate European Opening to Act Two - A European-oriented segue into the second half of the film, featuring the panoramic view of the United States from the nose of a B-25 bomber plane
• Cinerama Everywhere - A French-produced short on the Cinerama tent shows in Europe
• Tribute to the New Neon Movies - A short film celebrating an Ohio theater where a projectionist revived Cinerama through special screenings for people from all over the country
• Radio Interview with Cinerama Creator, Fred Waller - Recorded on the eve of opening night; accompanied by a slideshow of selected Cinerama images
• This is Cinerama Trailer - An updated recreation of the original theatrical trailer, edited with newly-restored clips
• Cinerama Returns to the Cinerama Dome (2002 Announcement Trailer) - Promotional short for the 50th anniversary of Cinerama and its return to the fabled Cinerama Dome in Hollywood
• "Breakdown Reel" - Footage originally projected interstitially during the interruptions of any Cinerama performance
• TV Spots - Original television ads for This Is Cinerama and Seven Wonders of the World