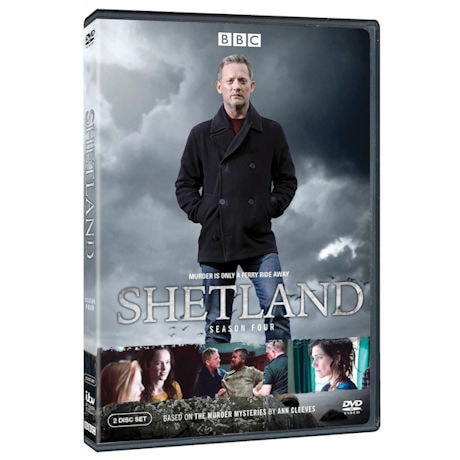 Welcome back to Scotland's breathtakingly beautiful Shetland Islands, where re-opening a teenager's cold murder case triggers a new chain of killings and attacks. Join good-natured DI Jimmy Perez (Douglas Henshall) and his bright young DS, "Tosh" MacIntosh (Alison O'Donnell), as they investigate the apparent copycat murder of a local journalist, killed while collecting clues about corporate manslaughter and its cover-up. Prepare yourself for shocks and suspense in this gripping police crime drama, inspired by the novels of Ann Cleeves. 6 episodes, 6 hours, 2 DVDs. SDH.

Episode 1
Thomas Malone returns to Shetland after serving 23 years in jail for the murder of teenager Lizzie Kilmuir, a crime he swears he didn't commit. Whilst most of the islanders are convinced of Malone's guilt, the appeal and his subsequent release have thrown up the possibility that someone else could be responsible for Lizzie's murder, but as Malone arrives back on Shetland, local journalist Sally McColl is found murdered. Perez and the team must investigate both cases.

Episode 2
The hunt is on for Malone's attacker, Malone seems to know who is responsible, but isn't keen to share the information. Perez and Rhona believe Andreas Hagan, the health and safety officer at Forst Energy isresponsible for covering up corporate manslaughter and is their strongest lead in Sally McColl's murder. Meanwhile, DNA testing in the Kilmuir case yields a surprising result.

Episode 3
With Andreas Hagan their strongest lead on Sally's killer, Tosh arrives in Norway, leaving Perez following up the leads on the Kilmuir case. Tosh accesses the CCTV from the airport and sees footage of Sally leaving the terminal, discovering she had met with a man who has far-right associations.

Episode 5
Perez must reassess the investigation in the aftermath of the attack. The MIT arrives on Shetland and sets its sights on Malone. Meanwhile, Tosh begins to have doubts about Lars.

Episode 6
The personal and the professional collide for Perez, as he finally closes in on the truth.