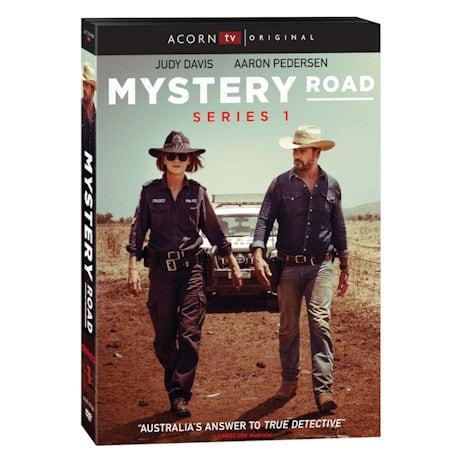 $39.99 $29.99
7 Reviews Write a Review
Item #: XC5862
Two-time Oscar® nominee Judy Davis (Feud) and award-winning actor Aaron Pedersen (Jack Irish, A Place to Call Home) star in this atmospheric crime set in the Australian outback. When two boys go missing from a cattle station, Detective Jay Swan (Pedersen) teams up with local cop Emma James (Davis) to investigate. But solving the mystery could expose other crimes that END_OF_DOCUMENT_TOKEN_TO_BE_REPLACED
Buy both series and save 10%!
Add to Wish List

Episode 1: Gone
When a truck is found abandoned in an outback cattle station, Senior Sergeant Emma James calls in Detective Jay Swan to investigate what happened to Marley, the driver. CCTV footage shows that Marley was with Reese, a backpacker recently fired from the station, who is also missing.

Episode 2: Blood Ties
Marley's uncle, Larry, is released from prison, but the town is less than enthusiastic to receive him back. Jay and Emma investigate whose blood they found on the road, then Reese's girlfriend, Georgia, arrives in town and gives the police information about him.

Episode 3: Chasing Ghosts
After a confrontation between Georgia and Shevorne, who both claim to be Reese's girlfriend, pressure builds on Shevorne to tell the police what she knows. Jay and Emma search Larry's compound and find a stash of drugs, while Jay's daughter, Crystal, gets a job with the local rodeo.

Episode 4: Silence
Now home safe, Marley claims to have no idea where Reese is, but Jay and Emma doubt his story. Crystal argues with her mother, Mary, about staying in town, and Mary takes out her frustrations at the bar.

Episode 5: The Water Hole
When Reese's body turns up, Emma is forced to charge Marley with his murder, but Jay doesn't believe he did it. Reese's mother asks to put up a memorial at Black Springs where Reese was found, prompting Emma to research that part of her family's land.

Episode 6: The Truth
After Marley confesses what he knows, Jay hides him to ensure his safety. Emma confronts her brother about the land deal, while Jay tries to find out what really happened to Shevorne.

"If Fargo were to swap the snow for red dirt, it might look something like this." — The Sydney Morning Herald (Australia)