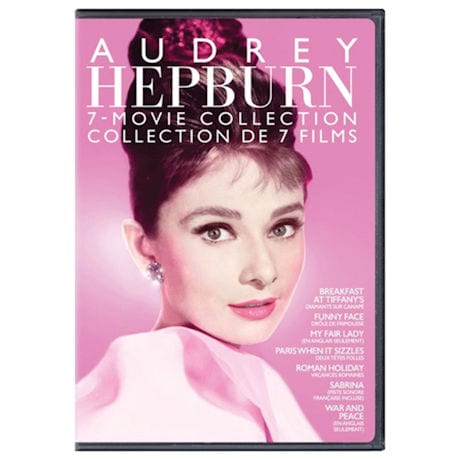 Beauty. Style. Grace. Audrey Hepburn captivated fans from her very first moments on the screen, and won our hearts again and again throughout her brilliant career. This collector's set of her classic films features Roman Holiday with Gregory Peck (for which Hepburn won her Best Actress Oscar®); Sabrina with William Holden and Humphrey Bogart; Funny Face with Fred Astaire; Breakfast at Tiffany's with George Peppard, Paris When It Sizzles (again with Holden), My Fair Lady with Rex Harrison and War and Peace with Henry Fonda. 16 ½ hrs, 7 DVDs.

MY FAIR LADY: This beloved adaptation of the Broadway stage hit stars AUDREY HEPBURN as Eliza Doolittle, a sassy, working-class London street vendor, and REX HARRISON as the elitist Professor Higgins, who attempts to turn Eliza into a sophisticated lady through proper tutoring. But, when the humble flower girl blossoms into the toast of London society, her teacher may have a lesson or two to learn himself.