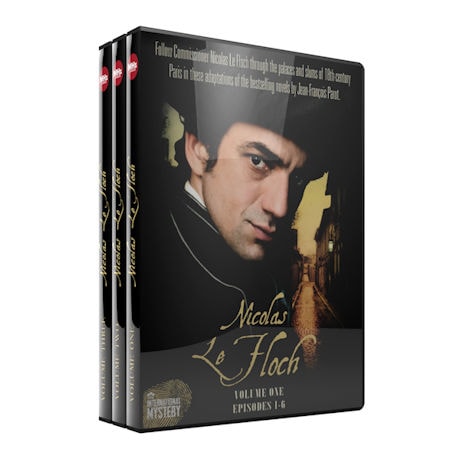 $89.99
4 Reviews Write a Review
Item #: XC9872
In 18th century Paris, brilliant young police commissioner Nicolas Le Floch (Jérôme Robart) works in a world teeming with crime, debauchery and theft. From seedy taverns to the grand hallways of Versailles, he solves crimes at all levels of Parisian society—including the royal court of Louis XV. Based on the series of novels famous for historical detail, and filmed on END_OF_DOCUMENT_TOKEN_TO_BE_REPLACED
Add to Wish List

In 18th century Paris, brilliant young police commissioner Nicolas Le Floch (Jérôme Robart) works in a world teeming with crime, debauchery and theft. From seedy taverns to the grand hallways of Versailles, he solves crimes at all levels of Parisian society—including the royal court of Louis XV. Based on the series of novels famous for historical detail, and filmed on location in Paris and elsewhere in France. 12 episodes, 24 ½ hrs, 7 DVDs. French with English subtitles.

Volume 1 Includes:
Episode 1 The Man with the Lead Stomach
Nicolas investigates the mysterious death of Viscount Lionel de Ruissec. Was it suicide or murder? Nicolas discovers that the murder is linked to a plot against King Louis XV and reigning favorite Madame de Pompadour.

Episode 2 The Blancs-Manteaux Enigma
Commissioner Lardin has apparently been murdered, and letters comprising the King have also been stolen. Who could have wanted him out of the way? Will Dr. Scemacgus, Nicolas' good friend, have to be brought in for questioning?

Episode 3 The Phantom of the Rue Royale
Beautiful Elodie Galaine is discovered strangled to death at a party thrown in Paris by Louis XV. Nicolas le Floch leads the investigation into the strange doings of the Galaine family.

Episode 4 The Nicolas Le Floch Affair
Nicolas Le Floch is suspected of having poisoned his mistress. To keep him from being unjustly implicated in the death, Louis XV sends Nicolas to London on a secret mission, where he discovers new leads into her death.

Volume 2 Includes:
Episode 7 - The Rogues Banquet
Leading the investigation into the death of an Italian noble, Nicolas Le Floch discovers the true identity of The Claw the kingdoms most wanted bandit. The Claw robs from the wealthy, but hes no Robin Hood. Le Floch must find a way to foil his plans and stop him once and for all.

Episode 8 - The Rue des Francs-Bourgeois Case
Nicolas Le Floch conducts an investigation into a spate of deaths by poison at the house of the influential M. de Montault. Before another poisoning, he has to discover the identity of the mysterious enemy and what the motive could be for targeting de Montault family.

Episode 9 - Murder at the Hotel Saint-Florentin
Nicolas Le Floch investigates a crime committed in the home of M. de Saint-Florentin. Multiple murders by a serial killer plus an astonishing murder weapon create a perfect storm, exposing the money, debauchery, espionage and follies of a young court.

Episode 10 - Blood in the Flour
Back from Vienna on a diplomatic mission, the Commissioner finds Paris up in arms; the Flour War is raging. With the help of a dead mans faithful friends, he investigates the death of a baker. Le Floch soon learns of a conspiracy that threatens the entire kingdom.

Volume 3 Includes:
Episode 11- The English Cadaver
While investigating the murder of a mysterious fugitive, Nicolas Le Floch is personally asked by the king to recover a stolen flute that was intended as a gift for Austria. The flute holds important symbolic value and is needed to cement France's alliance with Austria in a looming war against England.

Episode 12 - The Drowned Man
After returning from a naval battle against the English, Le Floch draws the ire of the King's cousin for exposing his incompetence while in command of the French fleet. The incensed cousin launches an elaborate plot to destroy Le Flochs reputation, along with that of the entire royal court.