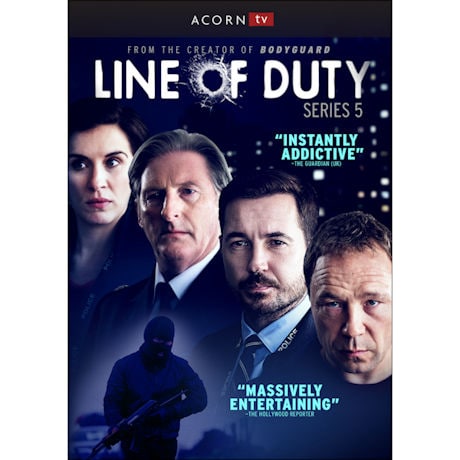 As the hit BBC police drama continues, the internal affairs investigators of AC-12 face their most vicious adversary yet. Led by Superintendent Hastings (Adrian Dunbar, Blood), DI Kate Fleming (Vicky McClure, Broadchurch) and DS Steve Arnott (Martin Compston, The Great Train Robbery) probe the hijacking of a seized-drugs transport that left three officers dead. When they learn that an undercover officer is embedded in Corbett's (Stephen Graham) group, AC-12 comes closer than ever to discovering the identity of the ringleader within the police department—but what they find could tear their team apart. 6 episodes, 6 1/2 hrs, 2 DVDs. Mature content.

Episode 1
When three police officers are shot dead during the hijacking of a seized-drugs transport, AC-12 moves in to investigate possible police collusion.

Episode 3
Corbett's most audacious plan yet requires McQueen to exploit links with corrupt police officers. AC-12's shocking discovery about one of their own reveals the scale of the corruption, including the enigmatic figure known only as "H."

Episode 4
Tensions mount between Corbett and McQueen in the fallout from the Eastfield raid. A breakthrough by AC-12 creates an opportunity to capture Corbett. With troubling questions hanging over the identity of "H," Hastings's erratic conduct makes Kate and Steve wonder about his motives.

Episode 5
Kate and Steve investigate Corbett's past and uncover evidence that may explain Hastings's increasingly reckless behavior. Meanwhile, the hunt for "H" intensifies.

Episode 6
Carmichael's dogged interrogation of Hastings presents mounting evidence of suspicious behavior. Caught in the crossfire, Kate and Steve are torn between loyalty to Hastings and their duty to uncover the truth, however painful. Will the identity of "H" be revealed at last?

"British crime drama at its finest" — The New York Times