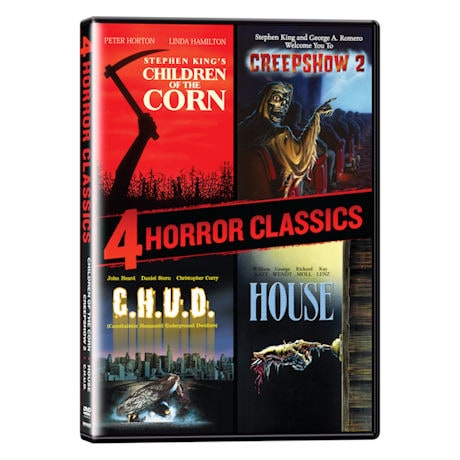 A killer collection of horror favorites, including two films based on stories by master of suspense Stephen King. Set includes Children of the Corn, Creepshow 2, C.H.U.D., and House. 6 hrs, 2 DVDs. Mature content.

Children of the Corn: A young couple (Linda Hamilton, Terminator 2, and Peter Horton, Thirtysomething) find themselves stranded in the rural town of Gatlin, Neb., where they encounter a mysterious religious sect of children. But nowhere in town are there any adults. The horror grows to a blood-curdling climax as the two new visitors learn the horrifying secret behind the prospering corn fields.

Creepshow 2: The rotting Creep himself is back with three new gruesome tales of horror that will make your skin crawl: a cigar store wooden Indian comes to life to avenge the store owner's brutal murder at the hands of three punks in Ol' Chief Woodenhead. Then four teenagers become the target of a terrifying, man-eating oil slick in The Raft. The chills continue with The Hitchhiker, the chilling tale of a woman who keeps running into, and over, the same mutilated man on a lonely road. Prepare for a terrifying roller coaster ride from the masters of horror!

House: Horror novelist Roger Cobb is a man on the edge, reeling from his recent divorce, haunted by the mysterious disappearance of his young son, and struggling with his new book about his traumatic experiences in Vietnam. But when he moves into the strange house left to him by his late aunt, Roger's precarious sanity comes under siege by nightmares of his dead war buddy, visits from a nosy neighbor, and an onslaught of hideous creatures from another dimension. Horror has found a new home, and it's fully furnished with murder, monsters and madness!

C.H.U.D.: Beneath the streets of New York city, there are hundreds of miles of subterranean tunnels unfit for anything human, unauthorized for anything experimental and unlikely to come to the surface…until now. Something horrible is loose in the sewers of Manhattan, and the city's homeless population has begun to mutate into `Cannibalistic Humanoid Underground Dwellers.' They are C.H.U.D. — hideous, hungry and headed for the streets!