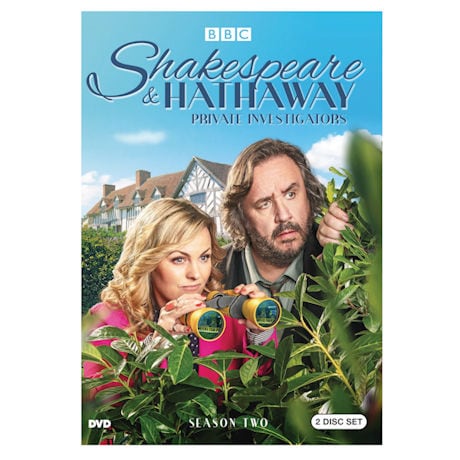 $34.99
2 Reviews Write a Review
Item #: XD1992
Hilariously mismatched, the detective duo of sunny Luella Shakespeare (Jo Joyner, Murdoch Mysteries) and grumpy Frank Hathaway (Mark Benton, Death in Paradise) are back on the case in tourist town Stratford-Upon Avon. You might think the birthplace of William Shakespeare would be safe from fraud, extortion, vice, identity theft, and ransom, but you would be wrong. 10 episodes, 7 ½ END_OF_DOCUMENT_TOKEN_TO_BE_REPLACED
Add to Wish List

Hilariously mismatched, the detective duo of sunny Luella Shakespeare (Jo Joyner, Murdoch Mysteries) and grumpy Frank Hathaway (Mark Benton, Death in Paradise) are back on the case in tourist town Stratford-Upon Avon. You might think the birthplace of William Shakespeare would be safe from fraud, extortion, vice, identity theft, and ransom, but you would be wrong. 10 episodes, 7 ½ hrs, 2 DVDs.

Episode 1 - Outrageous Fortune
Lawyer George Gonzalo seeks out Frank and Lu to help a client with a difference - he's got four paws and is worth his weight in gold. Mongrel Tim, heir to the late Theodore Athenaeus' vast shipping fortune, has run away from his life of luxury at the opulent Miranda Park. With the promise of a £25,000 reward for his safe recovery, Frank and Lu vow to suss out where, and why, Tim would flee.