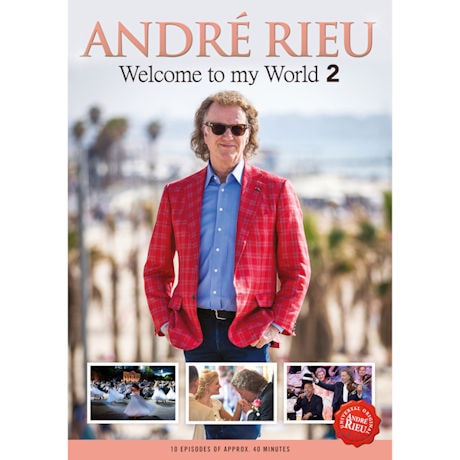 No Reviews Write the First Review
Item #: XD9692
Go behind the scenes with André and his Johann Strauss Orchestra as they tour the world. Featuring exclusive backstage footage plus incredible concert performances, this is a unique insight into the life of the most popular violinist in the world. A musical delight throughout, Rieu and his orchestra stage record breaking concerts in Bucharest, enjoy Christmas in London, celebrate spring END_OF_DOCUMENT_TOKEN_TO_BE_REPLACED
Add to Wish List

Go behind the scenes with André and his Johann Strauss Orchestra as they tour the world. Featuring exclusive backstage footage plus incredible concert performances, this is a unique insight into the life of the most popular violinist in the world. A musical delight throughout, Rieu and his orchestra stage record breaking concerts in Bucharest, enjoy Christmas in London, celebrate spring in Scandinavia, and more. 10 episodes, 6 ½ hrs, 3 DVDs.

Episode 1
André Rieu : Magic of Maastricht André welcomes you to the magical kingdom of Maastricht where he loves to make dreams come true : his fans enjoy an exclusive tour of his castle, an 11 year old violinist is overjoyed to join André on stage and the maestro grants wishes for the less fortunate. Performances include; The Sports Palace Waltz, My African Dream, and This Land is Mine.

Episode 2
André Rieu : How it all began A trip down memory lane. From André's church choir days to The Salon Orchestra and sell out concerts around the world. André reflects on his life and how his past has influenced his concerts today. Performances include ; Nearer my God to Thee, Libiamo and The Second Waltz.

Episode 3
André Rieu : Dance the Night Away A spectacular evening of music and dance in André's hometown of Maastricht. Lou Bega performs his classic Mambo No.5 and André invites 150 waltzing couples to join him on the Vrijthof for a night to remember. The cameras capture all the behind the scenes action as André gets his dancing shoes on!

Episode 4
André Rieu : Love in Maastricht André performs a concert full of love songs including ;The Blue Danube, Volare and What a Wonderful World. The orchestra talk about André's match-making skills and falling in love. Soprano, Carmen Monarcha, sings an aria especially for her boyfriend.

Episode 5
André Rieu : World Tour Join André and the Johann Strauss Orchestra on their grand world tour! In Chile he enthrals with an emotional performance of Besame Mucho, in Peru he wows with the epic Ode to Joy and he finds time to explore the vibrant city of Bangkok as he performs his first ever concert in Thailand.

Episode 6
André Rieu : Christmas in London André performs a Christmas concert in London filled with festive songs including ; O Holy Night, Hallelujah and Jingle Bells. André treats his orchestra to a Christmas feast and an evening at the Christmas market.

Episode 7
André Rieu : Making the Magic André performs his first ever concert in Bucharest and reveals the secrets behind his magical open air concerts. He is also joined by Romanian pan flute legend Gheorghe Zamfir for a special performance of The Lonely Shepherd.

Episode 8
. André Rieu : Wedding Special André celebrates the engagement of one of his sopranos and organises a lavish wedding. Featuring all the behind the scenes action from the ceremony and some classic performances from the bride to be, Mirusia Louwerse, including ;Some Day my Prince Will Come, Ave Maria and Memory. But why is André pulling a hot air balloon across a field?

Episode 9
André Rieu : European Dream André tours Europe celebrating the music of his classical heroes including Johann Strauss and Franz Lehar. He pays an emotional tribute to the 1930's Comedian Harmonists who would fall foul of the Nazi regime. André's European tour also provides the perfect opportunity for his orchestra to reunite with friends and family? a beautiful celebration.

Episode 10
André Rieu : My Musical Year Spring in Scandinavia and André invites a new tenor to join his ensemble, summer saw record temperatures in his hometown of Maastricht, autumn and André is joined on stage by the Carabineros de Chile, and in winter he performs a magical Christmas concert in London. Join André for his incredible Musical Year!