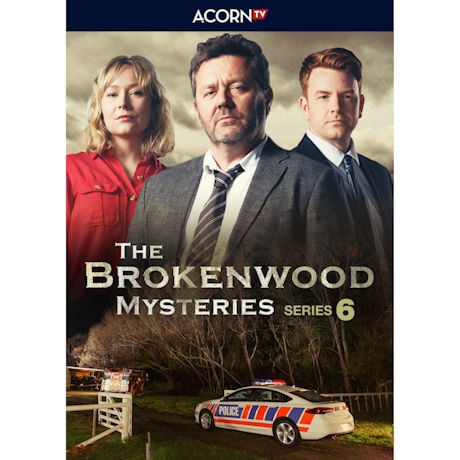 $59.99
BUY 2 OR MORE SERIES, SAVE 10%
Share Me:
add to wish list
Overview
Exclusive! Detectives Mike Shepherd and Kristin Sims return to uncover more macabre goings on in the quiet, picturesque, murder-ridden town of Brokenwood. In series 6, a Victorian fantasy event turns deadly, a renowned crime writer falls victim to his own fictional method of murder, an animal activist is slain on the first day of hunting season, and more. 4 episodes, 6 hours, 4 DVDs or 2 Blu-ray discs. SDH. Mature audiences.
Episodes
Episode 1: The Power of Steam (97 min)
Shepherd and his team are drawn into a world of Victorian costumes and science fiction when they investigate a death at a gathering of steampunk enthusiasts.

Episode 2: A Real Page-Turner (97 min)
A world-renowned author is killed in the same manner as his new novel, Knife in the Back, and the woman found kneeling over his dead body is Shepherd's ex-wife.

Episode 3: Dead Men Don't Shoot Ducks (96 min)
When an animal rights activist is shot while trying to disrupt the first day of duck hunting season, Shepherd and the team must determine if it was an accident or not.

Episode 4: Dead and Buried (96 min)
A suspicious suicide inside Brokenwood Women's Prison turns personal when Shepherd discovers he knew the victim from his days in the city.