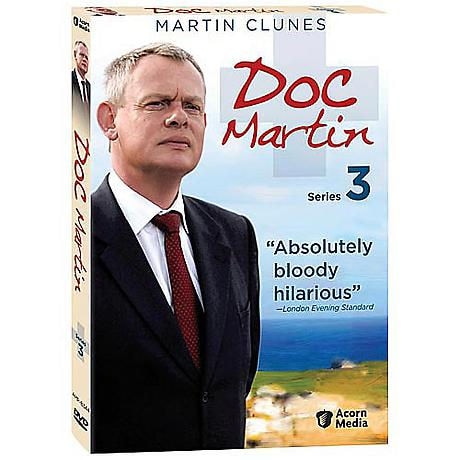 $39.99 $19.99
Share Me:
add to wish list
Overview
Dr. Martin Ellingham (Martin Clunes, Men Behaving Badly) is brilliant, dedicated, and highly efficient. He's also brusque, abrasive, and terrified of blood. Once a successful London surgeon, he's now a GP in the idyllic Cornish fishing village of Portwenn, where he's every bit as eccentric as the villagers he serves. With his terrible bedside manner, he has insulted everyone in town several times over. His relationship with Louisa (Caroline Catz, Murder in Suburbia) seems dead in the water. And he faces fresh challenges: The town's new constable has narcolepsy. Martin's beloved aunt Joan is aging. His receptionist, Pauline, is bored. He's also being pursued by a hypochondriac hotelier, much to Louisa's dismay. All of which make the good doctor even grumpier-and his antics even funnier. "The unlovable Doc Martin will win your heart" --Brattleboro (VT) Reformer. 7 episodes, approx 323 min. on 2 DVDs.
Episodes
Disc 1
Episode 1: Tick Tock (aired in the U.S. as "The Apple Doesn't Fall")
Louisa faints in front of her class, Aunt Joan nearly runs someone over with her car, and Portwenn's new policeman is falling asleep on the job. When a young girl exhibits symptoms of ADHD, Doc Martin's diagnosis is true to form: "She's very annoying."

Episode 2: The Morning After (aired in the U.S. as "Movement")
Taking Doc Martin's advice to "make some life changes," Bert Large abandons his plumbing business and opens a restaurant. Soon Portwenn is plagued by an outbreak of food poisoning. When Louisa falls victim, the doctor spoils a tender moment.

Episode 3: Love Thy Neighbor (aired in the U.S. as "City Slickers")
A family of city slickers moves in next to Louisa, bringing modern ideas about parenting and their bratty son. Doc Martin learns that the constable is agoraphobic as well as narcoleptic. When he threatens to report him, Aunt Joan puts phobias into perspective.

Episode 4: The GP Always Rings Twice (aired in the U.S. as "The Admirer")
Romance is in the salty air of Portwenn: Doc Martin is pursued by a glamorous divorcee. Aunt Joan is wooed by a handsome artist 30 years her junior. And Pauline's old boyfriend, Al Large, returns home. No wonder the doctor drives a bit erratically.

Disc 2
Episode 5: Breaking Up Is Hard to Do (aired in the U.S. as "The Holly Bears a Prickle")
Martin and Louisa go on their first proper date. When he ruins a kiss with a tactless remark, it's the last straw for Louisa. Meanwhile, Pauline's gambling causes problems in the office, and a near-fatal accident has repercussions for Martin and Louisa.

Episode 6: The Two of Us (aired in the U.S. as "Nowt So Queer")
The news of Martin and Louisa's engagement spreads quickly through the village; Aunt Joan is annoyed to hear it from Dave the postman. While plans are made for the wedding, mushrooms are making people sick, and Bert Large struggles to keep his restaurant afloat.

Episode 7: In Sickness and in Health (aired in the U.S. as "Happily Ever After")
It's Martin and Louisa's wedding day. The bridesmaid is injured, the vicar is drunk, a burst pipe floods the reception hall, and Martin has a personal encounter with a pig. Things go downhill from there.
Details
Packaging: Boxed set
Run Time: 323 minutes
Format: Widescreen
Number of discs: 2
Language: English
Subtitles: N/A
Color or B&W: Color
CC: No
SDH: Yes
Region Code: 1
Aspect Ratio: 16:9
Rating: N/A
Press
"Absolutely bloody hilarious"--London Evening Standard

"The unlovable Doc Martin will win your heart"--Brattleboro Reformer