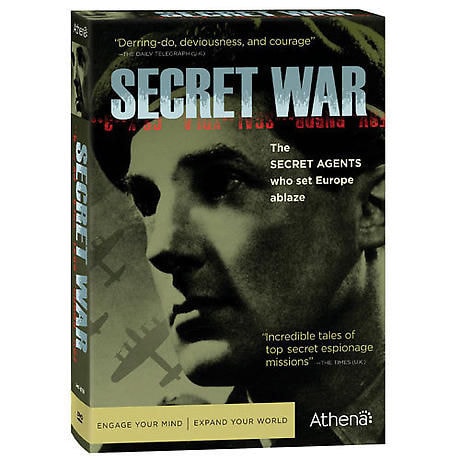 In 1942, the British army was locked in a deadly back-and-forth struggle in the North African desert with Erwin Rommel's Afrika Korps. Few were as motivated as the Special Interrogation Group--40 or so German-speaking Jews ready to risk immediate execution in order to strike at the Nazis behind the front lines.

A celebrated postwar fashion designer and style icon, Hardy Amies was one of the most unlikely spymasters of World War II. In the future dressmaker to the queen, the SOE found a man capable of unleashing a devastating wave of attacks on German-occupied Europe.

As Britain held out against the Nazis in Europe, the United States was desperate to keep supply lines open to its ally across the Atlantic. To do so, it needed help from the man who knew more about the operation of the New York City docks than anyone else: mobster Charles Luciano.

While pretending to spy for the Germans during the war, a young Yugoslav offered his services to the British, and at a stroke Agent Ivan became Agent Tricycle. He also learned about Japanese interest in aircraft carriers and the U.S. naval base at Pearl Harbor--intelligence the FBI tragically dismissed.

Episode 5: The Banker, the Norwegians, and the Bomb

Despite reverses on the battlefield, Hitler knew that if he could win the race to develop a nuclear bomb, he could still win the war. Churchill's SOE turned to a small group of highly trained Norwegian agents and a successful London financier to make sure that he didn't.

Episode 6: The English Scholar and the Fight for Greece

One SOE agent who would have a decisive impact on the future of Greece was an Oxford academic more interested in the country's classical past. In the end, his work among local partisans not only helped liberate Greece from Axis occupation--it also sowed the seeds of the Greek civil war.

Missions carried out by the SOE in Holland during World War II were among the most disastrous episodes in the history of British intelligence. Why did London continue to drop agents into the country only for them to be arrested by the Nazis? Was German counterintelligence really that good--or was something more sinister afoot?

With the Allied advance in northern Italy stalled in late 1944, the SOE prepared an attack on German military headquarters in the region. When London called the plans off at the last minute, the mission leaders had to decide whether to comply with the order or defy it.

Episode 9: The Spymistress and the French Fiasco

For much of WWII, the SOE waged a successful secret war in occupied France. But the woman at the heart of it all also presided over a series of bungled operations that delivered agents straight into the hands of the Gestapo. Was it simple (if uncharacteristic) incompetence on her part? Or did Britain's otherwise meticulous spymistress knowingly send agents to their deaths in order to hide a dark personal secret?

How did the Nazis manage to penetrate so thoroughly the French Resistance networks working with the Special Operations Executive? Why were so many British agents captured as soon as they landed in France? Part of the answer may lie in the activities of a mysterious agent who was working with the Germans and the British--and may have been reporting to a third party as well.

Beautiful, charismatic, and cunning, Winston Churchill's favorite spy was a young Polish woman, an inveterate gambler who seemed to thrive on adrenaline and beating the odds. For five years she did just that, risking her life to bring back information crucial to the Allied victory in Europe, only to succumb to danger of an entirely different sort after the war's end.

When an innocuous-looking Spanish civilian walked into the German embassy in Madrid and asked to spy for the Nazis, he set off a train of events that had huge consequences for WWII. Ultimately, this intrepid enemy of fascism--decorated by Germany and Britain alike--would run an imaginary network of spies and produce fake intelligence that reached the desk of the Fuhrer himself.

Episode 13: The Aristocrat and the Balkan Communist

On Churchill's orders, an SOE agent parachuted into German-occupied Yugoslavia in 1943 to cut a deal with communist partisans who had an agenda far beyond defeating the Nazis. The prime minister realized the dangers of cooperating with the communists even as Britain provided a home for Yugoslavia's royalist government in exile. Only time would tell if it was worth the risk.