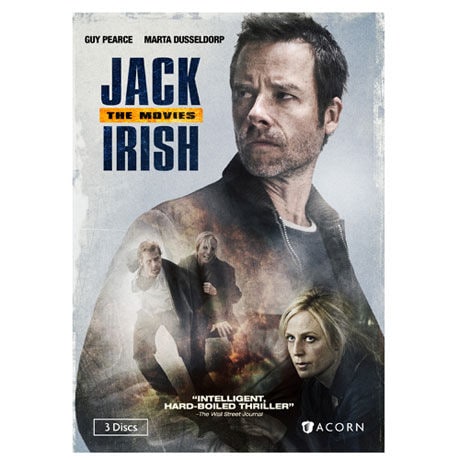 $39.99 $29.99
Share Me:
add to wish list
Overview
Emmy® winner Guy Pearce (Memento, Iron Man 3) is Jack Irish, the brooding Australian antihero of Peter Temple's award-winning crime novels. A former lawyer reeling in the wake of his wife's murder, he reinvents himself as a part-time private investigator and full-time alcoholic, then takes on cases that plumb the depths of Australian society. In Bad Debts, he uncovers corruption. In Black Tide, he helps an old family friend whose son has gone missing. In Dead Point, Jack is commissioned to locate a mysterious red book, but anyone who touches it turns up dead. With Marta Dusseldorp (A Place to Call Home) as journalist Linda Hillier, who sees the honorable man behind the disheveled exterior. "Intelligent, hard-boiled thriller"-Wall Street Journal. 3 feature-length mysteries, over 4 3/4 hrs, 3 DVD or Blu-ray discs, SDH. Mature audiences.
Episodes

Episode 1: Bad Debts
When criminal lawyer Jack Irish's wife was murdered by an irate client, Jack swore off his old life. Now he passes his time collecting debts, betting on horse races, and boozing at a dingy pub. Then a man he once represented dies, and Irish decides to delve deeper. With the help of reporter Linda Hillier, Jack uncovers a conspiracy that goes beyond the man's death.

Episode 2: Black Tide
Hoping to gain some insight into his past, Irish accepts a case from one of his dad's old friends. The man's son, Gary, has vanished after scamming thousands of dollars from his father. Jack throws himself headlong into the search, but his relationship with Linda suffers as a result. Worse, Jack soon realizes that Gary may be mixed up with dangerous and powerful people.

Awards
Sichuan TV Festival, Gold Panda Award Nomination for Best Performance by an Actor in a Mini-Series or Motion Picture Made for Television (Guy Pearce, 2015)