The Heroes of Scotland DVD 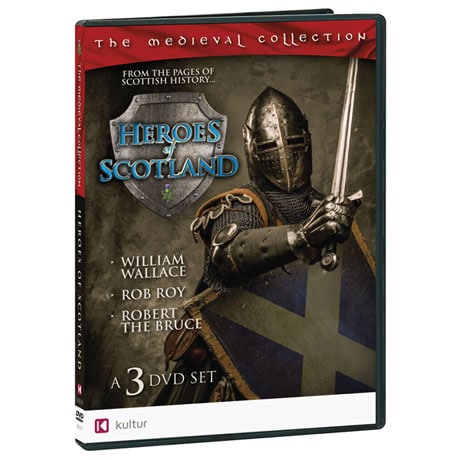 The Heroes of Scotland DVD

Overview
William Wallace, Rob Roy, and Robert the Bruce (the Bruce of Bannockburn) were three of Scotland's greatest warriors, fighting for independence, achieving legendary status, and shaping a nation. Filmed on location in the rugged beauty of Scotland's countryside, this series tells their stories through specially commissioned reconstructions, dramatized "eyewitness" accounts, expert commentary, 3D mapping, and re-enactment footage depicting the savagery of medieval battle. 3 episodes, 2 ½ hrs, 3 DVDs
Episodes
William Wallace
An example of unbending commitment to Scotland's independence, he died a martyr to the cause. A powerful true account of the life of a man captured forever in the hearts of the proud Scottish people.

Rob Roy
Roy Roy's generosity to the poor and oppressed earned him a reputation as a latter day Robin Hood. A look at the facts behind the national Scottish legend.

The Bruce of Bannockburn
Robert Bruce was the heroic Kind of Scots who secured Scotland's independence from England. With extensive original footage filmed in and around Stirling Castle itself, this is a unique record of the most celebrated victory in Scotland's history.

•Re-creations and reconstructions
•Studies of the great works
•Commentary and analyses from leading authorities, art historians, and scholars.