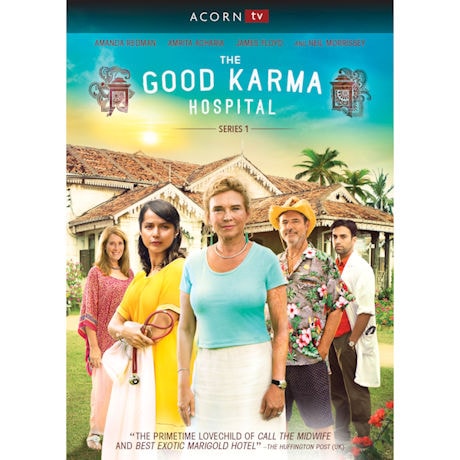 $39.99 $29.99
BUY 2 OR MORE SEASONS, SAVE 10%
Share Me:
add to wish list
Overview
To escape a broken relationship and a stressful career in the UK, junior doctor Ruby Walker (Amrita Acharia, Game of Thrones) takes a job in India. She applies to work at a modern clinic but ends up at a rural, run-down, overcrowded cottage hospital managed by the formidable Dr. Lydia Fonseca (Amanda Redman, New Tricks). It might be just the change Ruby needs. 6 episodes, 4 ¾ hrs, 2 DVDs or Blu-ray discs, SDH. Mature audiences.


Episodes
Episode 1: Ruby Walker, a junior doctor working in England, decides she has had enough of working in the UK and decides to head over to South India in search of a fresh start for her career. She finds herself at The Good Karma Hospital, run by Dr Lydia Fonseca - a hospital which is understaffed, underfunded, yet full of patients requiring treatment.

Episode 2: The doctors have a troubling mystery on their hands when an unidentified man is discovered washed up on the beach, and also face a race against the clock to find a local snake catcher whose luck may have run out, leaving him in urgent need of treatment.

Episode 3: Ruby becomes personally involved in the case of an abandoned baby that is brought to the hospital during the Holi festival, and Lydia is reunited with an expat artist, whose unusual lifestyle may be about to catch up with him.

Episode 4: Ram clashes with Lydia as a medical case becomes personal on the day he is due to attend a lavish wedding. Ruby treats a patient from the UK whose story does not add up, and the experience leaves her wondering where she really belongs.

Episode 5 Lydia and Ruby visit a convent to make a seemingly miraculous diagnosis, but the treatment of a young nun and the senior doctor's interfering attitude creates tension between them. Maggie and Paul join a group of pilgrims on a trek through the jungle, hoping to find the answer to their prayers.

"A welcome kaleidoscope of character and color" -TellyBinge.com