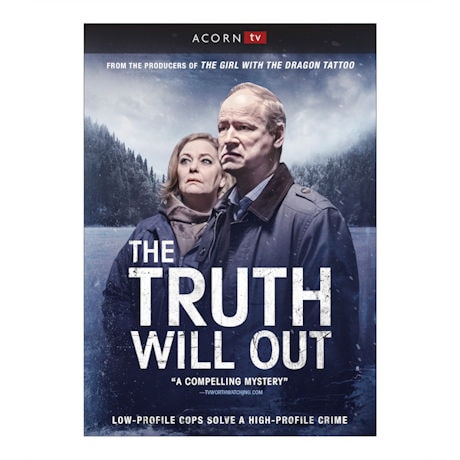 $39.99 $29.99
2 Reviews Write a Review
Item #: XD0722
Detective Peter Wendel (Robert Gustafsson) is tasked with creating an elite team of investigators to crack cold cases - but only the dregs of the force are available to work the case. Two cops who hate each other, plus a forthright woman who isn't even a police officer. Can his lowly group solve this high-profile crime? From the producers of END_OF_DOCUMENT_TOKEN_TO_BE_REPLACED
Add to Wish List

Detective Peter Wendel (Robert Gustafsson) is tasked with creating an elite team of investigators to crack cold cases - but only the dregs of the force are available to work the case. Two cops who hate each other, plus a forthright woman who isn't even a police officer. Can his lowly group solve this high-profile crime? From the producers of Girl with the Dragon Tattoo. Inspired by true events. "Riveting…utterly absorbing Scandi noir" —The Euro TV Place 8 episodes, 6 hrs, 2 DVDs SDH. In Swedish with English subtitles.

Episodes 1: Recruiting the Team
Detective Peter Wendel is assembling a new cold-case group, but the only people who apply for the job are Jorma and Kajsa, two cops who hate each other. But then an attorney is found murdered, with a note on his body stating that a notorious serial killer he defended is a fraud. Peter has no choice but to hire his lackluster candidates, along with Barbro, who isn't even a police officer.

Episodes 2: Leaked Investigation
Peter's investigation leaks to the media, causing chaos at police headquarters and the justice department, where Peter's ex-wife, Ann-Marie, works. As Peter hides his connection to the murder weapon, all the evidence indicates that a missing pedophile, previously a suspect in one of the serial killer's murders, killed the attorney.

Episodes 3: Murder Weapon
Peter and Barbro keep looking for the killer in Stockholm, as Jorma and Kajsa search the pedophile's house. Peter becomes a suspect when he admits that the murder weapon belonged to him.

Episodes 4: Prior Crimes
After the explosive TV interview, Peter tries to talk the justice minister, but Ann-Marie prevents him. Jorma wants to leave Hallstavik, but Kajsa has one last lead to follow up. Later, Ann-Marie starts to suspect that Peter may be right about a conspiracy in the justice department.

Episodes 5: Old Grudges
The cold-case group are forced to release their suspect, but Peter decides to follow him. Ann-Marie's job is on the line when Peter's old letter threatening the minister of justice resurfaces. Meanwhile, their suspect seems to be planning a horrible crime.

Episodes 6: New Lead
Peter refuses to accept his suspension and continues to follow the suspect, secretly aided by Kajsa and Jorma. The investigation takes Barbro to the village of Österbymo, where there was a mysterious disappearance many years ago. As Ann-Marie seizes an opportunity to document the conspiracy at the justice department, the suspected killer decides to talk to Peter, face-to-face.

Episodes 7: Hostage
Peter and his team feverishly try to track down their suspect, now finding even more disturbing evidence that the killer is planning something terrible. At the justice department, Ann-Maire finally confronts the minister, causing major consequences for all involved.

Episodes 8: Manhunt
As the whole world watches, Peter and the cold-case group lead Sweden's biggest manhunt in decades. Barbro returns to Österbymo to look for answers relating to that disappearance, which they now realize was the killer's first victim. It seems like all is lost, when suddenly the killer contacts Peter for one last game of cat and mouse.