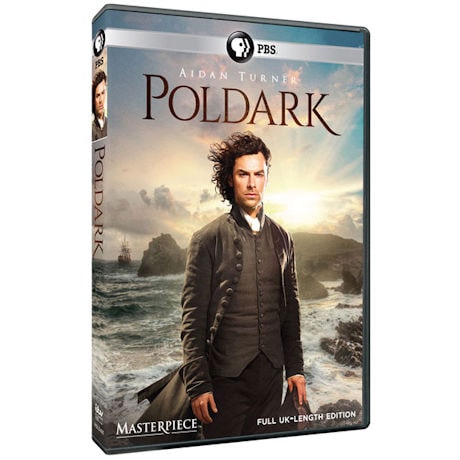 No Reviews Write the First Review
Item #: WA7882
Ross Poldark rides again in a new adaptation of the hit series that helped launch Masterpiece Theatre in the 1970s. Impossibly handsome Aidan Turner (The Hobbit) stars as the redcoat captain who returns to Cornwall after the American Revolution to find his father dead, his inheritance in ruins, and his former fiancee engaged to another man. Based on the novels END_OF_DOCUMENT_TOKEN_TO_BE_REPLACED
Add to Wish List

Ross Poldark rides again in a new adaptation of the hit series that helped launch Masterpiece Theatre in the 1970s. Impossibly handsome Aidan Turner (The Hobbit) stars as the redcoat captain who returns to Cornwall after the American Revolution to find his father dead, his inheritance in ruins, and his former fiancee engaged to another man. Based on the novels by Winston Graham, seen on PBS, the remake drew millions of viewers in the UK. Eleanor Tomlinson (Death Comes to Pemberley) is Poldark's new love, Demelza. 8 episodes, 8 hrs, 3 DVD or Blu-ray discs, SDH.

Episode 1
Ross Poldark, a British veteran of the American War of Independence, travelling home to Cornwall, discovers his father has died. He calls at his uncle's home to discover his inheritance in ruins and his sweetheart Elizabeth betrothed to another - his cousin Francis Poldark. Having sold some of his family's possessions, he goes to market and comes across an urchin, Demelza Carne, being attacked by ruffians who want to steal her dog. Demelza has left home after being beaten by her father. Ross's uncle tries to persuade him to leave Cornwall; Ross becomes more determined to stay and work his inheritance.

Episode 8
Warleggen's plan to close Ross's smelting company comes to fruition when the company is outbid for the available copper. George Warleggen celebrates by buying a ship. An epidemic of putrid throat strikes down peasant and gentry alike including Francis, Elizabeth, and their son. Demelza goes to their aid and she and her own baby, Julia, succumb to the disease resulting in the girl's death. Warleggen's ship is wrecked off Ross's land and starving mineworkers descend on the ship, with Ross's connivance, to take food and plunder the cargo. Ross rescues the surviving passengers and crew and takes them to his home. George's cousin Matthew died in the wreck and Ross is arrested for murder and wrecking.

"It's a perfect Sunday-night drama..."--The Guardian