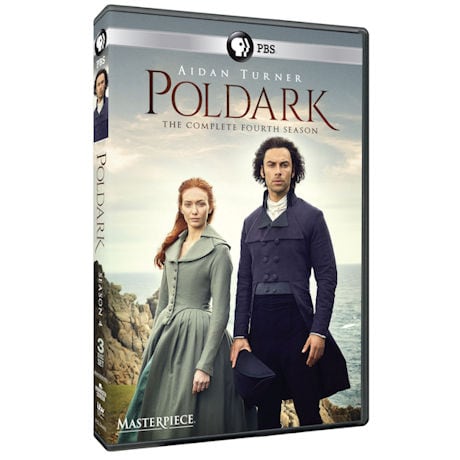 $44.99 $39.99
4 Reviews Write a Review
Item #: XC3772
Aidan Turner returns as Ross Poldark in this much anticipated fourth season. The country is gripped by political uncertainty along with his marriage with Demelza (Eleanor Tomlinson). 8 episodes, 8 hrs, 3 DVD or Blu-ray discs.
Add to Wish List

Aidan Turner returns as Ross Poldark in this much anticipated fourth season. The country is gripped by political uncertainty along with his marriage with Demelza (Eleanor Tomlinson). 8 episodes, 8 hrs, 3 DVD or Blu-ray discs.

Episode 1: Prime Minister Pitt calls an election and uncertainty grips the country; while Ross watches Cornwall struggle under the power of Truro's MP, George Warleggan, Demelza's infidelity leaves her torn between her husband and a lovesick Hugh.

Episode 2: The Poldarks are on a mission to restore their relationship, as Cornwall's election approaches and difficult decisions must be made.

Episode 3: Ross must rise to the challenge of parliament, but the distance from Cornwall brings trials of its own as George, refusing to accept defeat, begins stacking the odds in his favor; Ossie tends to a dying parishioner.

Episode 4: Dwight and Caroline face heartbreak before flooding at the mines puts a life in danger; Ossie plots to have Morwenna put in an asylum; Rowella's husband becomes suspicious.

Episode 5: With grain prices rising across the country, working men struggle to support their families; Ross's efforts in Westminster meet successive failures and he is advised to take a more nuanced approach.

Episode 7: The Poldarks, Enyses and Warleggans enjoy London's distractions; George dotes on Elizabeth, delighting at the prospect of an heir; Lady Whitworth has a physician agree to commit Morwenna to an asylum.

Episode 8: Elizabeth hopes to persuade George that Valentine is his child once and for all; Ross returns to Cornwall to mend things with Demelza; Demelza helps Morwenna and Drake build a future; Elizabeth attempts to repair her own marriage.