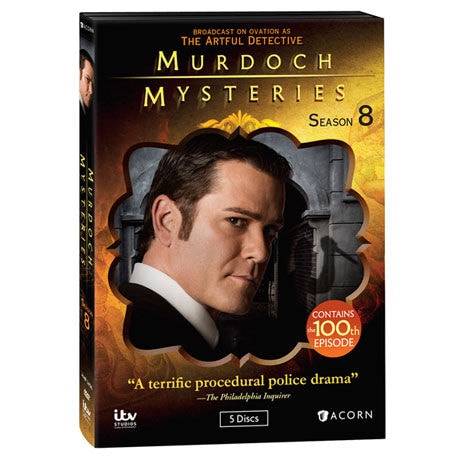 $59.99 $29.99
8 Reviews Write a Review
Item #: XA2922
Murdoch (Yannick Bisson) unravels a murder that may be linked to the brutal assault on Brackenreid (Thomas Craig). He teams up with Bat Masterson to hunt for Butch Cassidy and the Sundance Kid, seeks help from Thomas Edison, and investigates W.C. Fields. The series' 100th episode is a wedding with complications: lost rings and a murder to be solved. With END_OF_DOCUMENT_TOKEN_TO_BE_REPLACED
Add to Wish List

Murdoch (Yannick Bisson) unravels a murder that may be linked to the brutal assault on Brackenreid (Thomas Craig). He teams up with Bat Masterson to hunt for Butch Cassidy and the Sundance Kid, seeks help from Thomas Edison, and investigates W.C. Fields. The series' 100th episode is a wedding with complications: lost rings and a murder to be solved. With Helene Joy as Julia Ogden. Murdoch Mysteries Season 8 features 18 episodes, 5 DVD or 4 Blu-ray discs, SDH.

Disc 1
Episode 1: On the Waterfront, Part One
When a businessman is bludgeoned to death in the dining room of the Queen's Hotel, the crime points to the O'Shea brothers and their dockyard gang-the same men who brutally beat Inspector Brackenreid. As the police go to war against the O'Sheas, Julia and Emily start a fight of their own, agitating for women's suffrage.

Episode 2: On the Waterfront, Part Two
While Murdoch continues his investigation of the O'Sheas and their boss, Brackenreid also pursues them--outside the bounds of the law. In the aftermath of their protest, Julia, Emily, and their fellow suffragettes face charges in court.

Episode 3: Glory Days
While in Toronto, legendary American lawman Bat Masterson spots Butch Cassidy and the Sundance Kid at a boxing match. He agrees to assist the constabulary in hunting down the outlaws, despite Murdoch's reluctance.

Episode 4: Holy Matrimony, Murdoch!
With their wedding fast approaching, Murdoch and Julia are distracted by the plight of a woman on trial for killing her husband. When new evidence comes to light, the two set about reinvestigating the crime even as they walk down the aisle.

Disc 2
Episode 5: Murdoch Takes Manhattan
While on their honeymoon in New York City, Murdoch and Julia stumble onto a mystery that may have dire consequences for the country. Back in Toronto, Inspector Brackenreid and Dr. Grace tackle the case of a dead man run over by a motor car.

Episode 6: The Murdoch Appreciation Society
When a corpse is discovered in a public park, evidence found on the man's body leads Murdoch down a twisty path of clues, both real and counterfeit. Meanwhile, Crabtree hunts for a cadaver gone missing from the medical school.

Episode 7: What Lies Buried
During renovations of the police station, workmen dig up a body buried in the building's cement. When the dead man is identified as a constable who disappeared in 1881, the tables are turned as the cops become the suspects.

Episode 8: High Voltage
When a man is electrocuted to death by his own invention, the investigation takes Murdoch to a spurious science emporium and an old acquaintance, Mr. Thomas Edison.

Disc 3
Episode 9: The Keystone Constables
Comedian Bert Grady is shot to death in a dark alley after a killer performance. Although Grady was a hit onstage, he was hated by his fellow vaudevillians, leaving Murdoch with a cast of suspects-including a young W.C. Fields.

Episode 10: Murdoch and the Temple of Death
The body of man in the river leads Murdoch and Crabtree to a mysterious, Byzantine-type structure known as the "Temple of Death" in local lore. Murdoch seeks the help of a friend, archaeologist Dr. Iris Bajjali, in searching for a revered relic within its walls.

Episode 11: All That Glitters
A surveyor for the railroad collapses at the feet of Crabtree and Higgins, gasping out his last words: "eagle flight." Murdoch and Crabtree trek into the woods of Northern Ontario to follow the trail of the deceased.

Episode 12: The Devil Wears Whalebone
Fashion claims a victim when a brick thrown through the window of a corset shop strikes a young model in the head. Although the blame appears to lie with protesters against the garment, Murdoch finds that the crime has more threads to unravel.

Disc 4
Episode 13: The Incurables
In the isolation ward at the asylum, a nurse is murdered by one of the "incurables," criminally insane murderesses. Despite the danger to herself, Julia is determined to find out who killed the nurse and how.

Episode 14: Toronto's Girl Problem
Dr. Grace recognizes a stabbing victim as the hostess of a party she had attended the night before. Emily goes undercover to infiltrate the dead woman's shoplifting ring, while Inspector Brackenreid's nephew makes his mark as the station's newest constable.

Episode 15: Shipwreck
A devout young woman's murder unexpectedly reunites Murdoch with his childhood mentor, Father Keegan. As the two work together to solve the crime and locate a missing priest, Murdoch recalls a formative event from his youth.

Disc 5
Episode 16: Crabtree Mania
When wrestling champion "Handsome" Randolph Henderson dies after a match, Crabtree suspects foul play and requests to look further into the incident. Meanwhile, the suffragettes debate whether to align with the temperance movement to gain more votes.

Episode 17: Election Day
Tensions run high on Election Day, and when a man is strangled to death shortly after voting, the murder may have implications for national security. Crabtree receives exciting news, while the suffragettes scramble to rectify a mistake on the ballots.

Episode 18: Artful Detective
As bodies pile up in the morgue, the victims killed in different ways but most missing the same macabre trophy, it appears that a sequential killer is on the loose in Toronto. While Murdoch hunts for the culprit, Crabtree deals with a perilous situation of his own.

"A little masterpiece of tone and style"--Globe & Mail (Canada