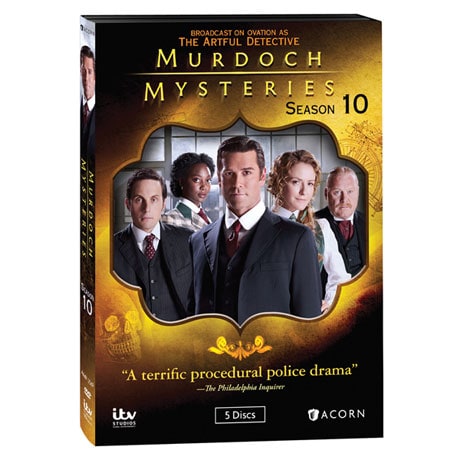 $59.99 $29.99
25 Reviews Write a Review
Item #: XB1562
Murdoch and Julia encounter unforeseen obstacles in building their dream home, while Crabtree's burlesque dancer sweetheart becomes a person of interest. The team looks into the death of a champion show dog as well as a roller derby-related murder, and The Great Fire of Toronto serves as a backdrop for the investigation of the murder of two debutantes, featuring special END_OF_DOCUMENT_TOKEN_TO_BE_REPLACED
Add to Wish List

Murdoch and Julia encounter unforeseen obstacles in building their dream home, while Crabtree's burlesque dancer sweetheart becomes a person of interest. The team looks into the death of a champion show dog as well as a roller derby-related murder, and The Great Fire of Toronto serves as a backdrop for the investigation of the murder of two debutantes, featuring special guest Samantha Bond (Downton Abbey). 18 episodes, 13 hrs, 5 DVDs or Blu-ray discs. SDH. Mature audiences.

Episode 1 Great Balls of Fire (Pt 1)
Part 1 of 2. In the Season 10 premiere, Murdoch investigates when a debutante is murdered, and suspects one of the rivals for a wealthy bachelor's affections may be responsible.
Episode 2 Great Balls of Fire (Pt 2)
Conclusion. A massive inferno in Toronto complicates Murdoch's investigation of homicides involving two young women.
Episode 3 A Study in Pink
Murdoch discovers his childhood friend, who's become a private investigator, may be a murder suspect, so he uses his latest invention to uncover the truth.
Episode 4 Concocting a Killer
A reopened murder case points to the possibility that Murdoch and Ogden may have sent the wrong man to prison.
Episode 5 Jagged Little Pill
The poisoning of a philandering businessman is investigated by Murdoch and Ogden; Rebecca James suspects something is amiss regarding a fellow medical student's suicide.
Episode 6 Bend It Like Brakenreid
Murdoch investigates the strange death of a footballer, and Brackenreid gets caught up in the team's run for the Olympics.
Episode 7 Painted Ladies
Murdoch probes a connection between dead men found with lipstick smears on their faces and Crabtree's burlesque-dancer sweetheart.
Episode 8 Weekend at Murdoch's
Murdoch and Crabtree pretend a murdered witness is still alive in order to catch a killer.
Episode 9 Excitable Chap
Murdoch tracks a lecherous costumed criminal known as the Lurker, whose amorous encounters have led to murder.
Episode 10 The Devil Inside
Murdoch and Ogden investigate a killer who claims he's possessed by the devil.
Episode 11 A Murdog Mystery
Murdoch investigates the death of a championship show dog and discovers a hidden affection for canines.
Episode 12 The Missing
Murdoch investigates a man who claims to be a wealthy heir who, 20 years ago as a child, disappeared after being kidnapped.
Episode 13 Mr. Murdoch's Neighborhood
Murdoch and Ogden use their riverside property as a burial spot to study human decomposition, and they unearth more than expected.
Episode 14 From Murdoch to Eternity
Murdoch concocts a mysterious tonic that restores youthful vitality, but his pursuit of a partnership alarms Crabtree.
Episode 15 Hades Hath No Fury
An investigation of an explosion involving the mysterious woman Watts has been seeing leads Murdoch to an unusual community.
Episode 16 Master Lovecraft
Murdoch investigates when a girl's body is found and some grotesque sketches lead him to a gang of death-obsessed teens that includes a young H.P. Lovecraft.
Episode 17 Hot Wheels of Thunder
Murdoch investigates the death of a roller-skating champion, which leads him into a world of aggressive and ruthlessly competitive young women.
Episode 18 Hell to Pay
A burlesque dancer asks Murdoch for help, which throws the team into a conspiracy and unforeseen danger.